As trade tensions and security issues continue to stunt corporate growth within the developed world, increasing amounts of foreign investors are looking towards the UAE as a destination in which to conduct business.

The UAE is a federation made up of seven emirates: Abu Dhabi, Dubai, Sharjah, Ras al-Khaimah, Ajman, Umm al-Quwain and Fujairah, with over six million of the 9.5 million population living in Dubai and Abu Dhabi.

It has rapidly transformed from an economy once reliant on fishing and pearls, to become a financial powerhouse accessible within an eight-hour flight by two thirds of the world's population. Add to this a diverse economy, stable political system, strong capital flow, favourable taxation environment and liberal trade regimes, and the UAE is now an attractive investment hub with a '2021 Vision' of becoming the economic, touristic and commercial capital for over two billion people. These ambitious goals continue to facilitate a hospitable, well-regulated and secure business ecosystem.

Often associated with the oil and gas industries, the UAE has indeed utilised its natural reservoirs to gain a foothold on the international stage. As a result, it now boasts both the economic and physical foundations for a diverse and well connected domain ripe for business. This is epitomised by the World Bank's 2018 Logistics Performance Index rankings, with the UAE ranked 11th out of 160 countries in terms of trade logistics. 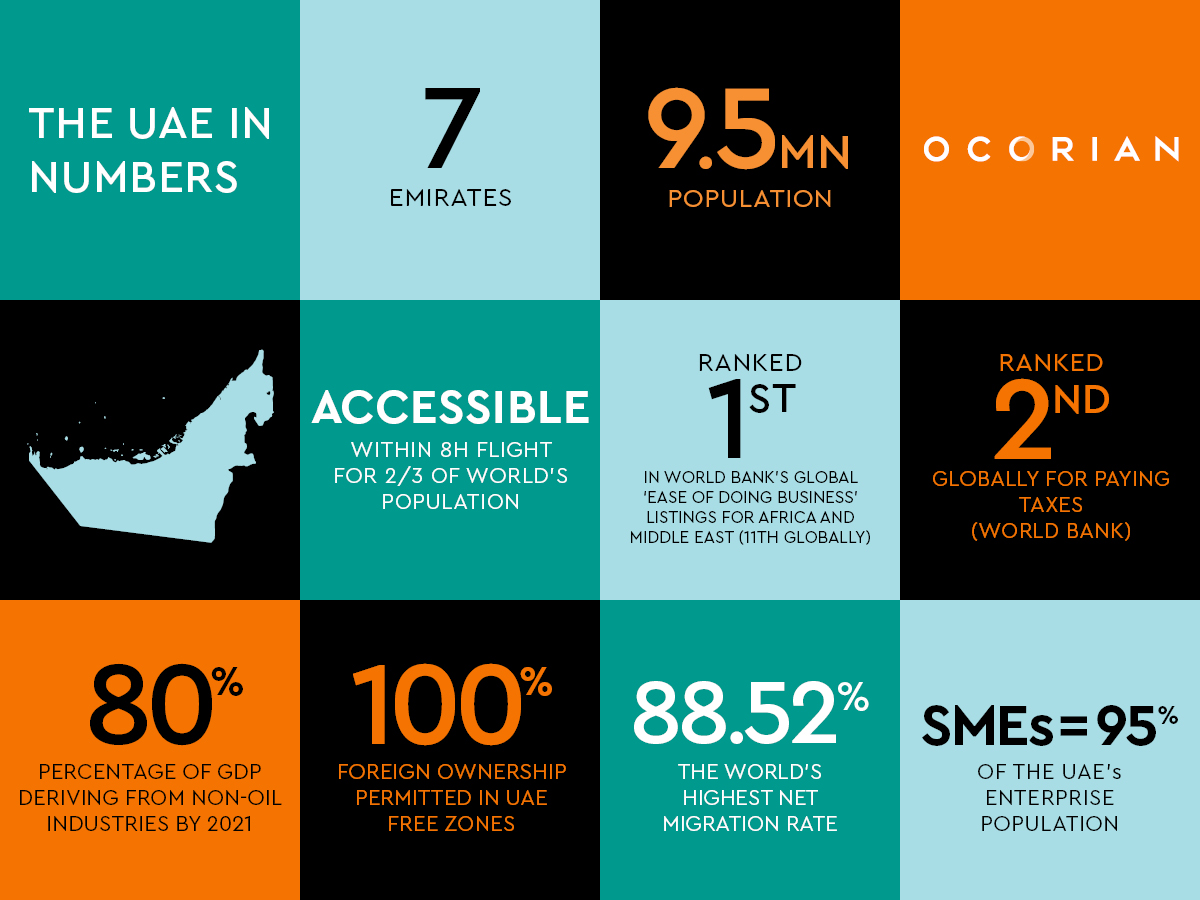 The UAE is seen as a prime launch-pad for countries wishing to access markets around the world. Its geographical location and amicable time zone (GMT +4), give businesses wishing to access markets in Africa, Asia and Europe a regional and business-centric hub from which to operate. This is reiterated by its population demographic - it has the world's highest net migration rate (88.52%) consisting of over 200 nationalities - and in HSBC's 2018 Expat Explorer survey - taking into account expats' experience, family life and economics - the UAE ranked 10th globally.

It is also ranked 11th in the World Bank’s 2019 global ‘Ease of Doing Business’ listings, the highest ranking nation in the Middle East and Africa region. In order to capitalise on this hospitable business environment, the UAE government issued a Decree on 30th October 2018; relaxing existing domestic ownership restrictions and representing the next step towards permitting 100% foreign ownership outside of free zones.

Along with English as the widely accepted language of business and a new long-term visa system having gained approval earlier in the year - including special residency-visa privileges for expats over the age of 55, enabling them to obtain a renewable five years residence visa - conducting business in the UAE is becoming even easier for foreign investors.

A large incentive which attracts and enables businesses to flourish within the UAE is its strong network of international tax treaties. The UAE has more than 115 double taxation treaties (DTAs) in place with other countries, ensuring businesses and residents are not taxed twice on the exchange of goods, capital and services. This extensive network removes the difficulties relating to cross-border trade and investment flows.

There are several options available to foreign investors looking to undertake business in the UAE:

From diversifying to burgeoning

In recent years and through a push from the Gulf Cooperation Council (GCC) - the regional inter-governmental economic and political union - the UAE has made a concerted effort to diversify its economy to become less dependent on oil and natural gas.

The portion of the UAE’s current GDP originating from non-oil industries is nearing 80% and growing at an average rate of 3.3% (2017), highlighting the success in generating growth away from its once sole commodity of 'black gold'.

As the economy has diversified and industries have been subject to active promotion from the federal government, foreign investment has flooded into the UAE. Around 80% of Fortune 500 companies now have an established presence there, with 2017 witnessing a 10% increase in Fortune Global 500 companies with a dedicated entity covering the Middle East and Africa.

Down to a number of factors including rising oil prices and a European debt crisis, the promising growth figures are also a result of a substantial government focus on expanding industries. Trade, healthcare, logistics, banking, tourism, real estate and manufacturing are all reaping the benefits of a government targeting a shift to a diversified and knowledge-based economy, namely, making the UAE one of the best countries in the world as outlined in their '2021 UAE Vision'.

An economy with ambition

To catalyse growth within specific industries, the UAE Cabinet has introduced a number of incentives. For example, in May 2018 the Cabinet announced that foreign investors and professionals in medical, scientific, research and technical fields, will be eligible for residency permits with a validity of up to ten years (up from the current two to three years). Moreover, foreign investors will be allowed 100 per cent ownership in some specific onshore business sectors (with that likely to spread in the coming year). This incentivised push to attract foreign business is further aided by 2020's World Expo in Dubai.

A 'festival of human ingenuity', the Expo intends to showcase and explore what is possible when new ideas and people connect. It is expected to draw in millions of visitors throughout the year and boost private consumption and services exports. This drive for business innovation is embodied by the UAE's small and medium-sized enterprises (SME) population.

SMEs represent 95% of the UAE's enterprise population, and there is a large swathe of FinTech companies making use of the area's tax efficiencies. In 2017 alone, the number of Fortune Global 500 technology companies that had a presence within the Middle East and Africa increased by 33%. The existence of tax efficiencies, most notably in dedicated areas such as free zones, embodies the government’s dedication to providing a business-friendly platform for the world’s most innovative start-ups.

The UAE’s glut of hydrocarbon resources previously obscured the need for prevalent taxation. Although the introduction of 5% VAT in 2018 in response to the low oil prices of 2014-16 contests this, many of the free zones and mainland businesses are completely exempt from tax.

Businesses on mainland UAE are restricted in terms of company ownership - the UAE legal framework generally favours local over foreign investors (although recent legislation suggests this may be changing). Free zones permit 100% foreign ownership and are independently administered and governed by their own regulatory authorities; essentially being one-stop-shops for documentation. Entities based in free zones can trade freely within their respective free zone and outside the UAE, making them attractive destinations for foreign businesses wishing to expand their jurisdictional reach.

Free zones differ with respect to the industry that inhibits them, with appropriate regulatory bodies and legislation particular to each. For example, in the case of financial services companies - which make up the UAE’s fourth largest industry - they can join the Dubai International Financial Centre (DIFC). The DIFC is considered an ‘offshore’ free zone and is regulated by the Dubai Financial Services Authority (DFSA).

The DIFC focusses on asset management, fund registration, banking, insurance, Islamic finance and capital markets and is regulated along English common law lines in DIFC courts, independent of the UAE federal government for non-criminal laws. The DIFC's primary goal is:

'To be a financial free zone offering a unique, independent legal and regulatory framework in order to create an environment for growth, progress and economic development in the UAE and the wider region.'

And it is succeeding. In the first half of 2018, more than 150 companies were licensed in the DIFC, boosting the total number of companies to 2,003. The DIFC is also home to over 60 significant funds, a figure that makes it the leading fund domicile in the region and strengthens its position as a regional bridge for companies wishing to access global markets.

This flexibility for businesses is also prevalent in the financial free zone, Abu Dhabi Global Market (ADGM); with any member business able to set their contracts as per DIFC/ADGM laws and use the DIFC/ADGM common law courts in case of any dispute. The use of these courts has surged over the last year, one attraction being the pace with which resolutions are reached. Over 88% of cases between January and June 2018 in the higher courts were resolved within six months.

The use of British common law combined with complete foreign ownership and contract flexibility make the UAE's free zones a hub for foreign businesses with international goals. In the first nine months of 2018 alone, free zone trade grew by 22% on the same period last year.

With reputable regulation, an ultra-low tax environment and a government hungry for foreign investment, the UAE has sculpted itself into both a convenient and economically efficient business habitat. As investments increase ahead of Dubai’s hosting of the World Expo in 2020, real estate prices become more affordable and as African markets continue to show promise, the UAE provides an established platform for businesses and investors with global ambition.

Ocorian Dubai offers services ranging from corporate structuring advice to company formation and secretarial services. We also have a number of Private Client offerings that include Family Offices and UAE Foundations. Our specialist expertise also encompasses support services including, accounting, visa and administration services in connection with running a UAE-based business in the various free-zones. Learn more about our UAE offering and our key contacts here.

We are delighted to announce that Ocorian's Alternative Investments team won the 'Best Fund Servic...

Keep up to date with our latest news and insights